The Q's of Qlick: The importance of critical thinking as a leader

The Q's of Qlick: The importance of critical thinking as a leader

Recently we conducted the first interview in the series ‘the Q’s of Qlick’, in which we invite interesting business leaders for a conversation on leadership. We consciously chose these leaders because we believe they each have a particular skill in the different competencies of 3D-leadership. 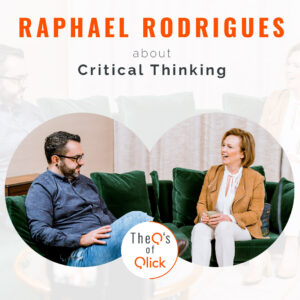 Today I am interviewing Raphaël Rodrigues of Plat4Mation on the importance of critical thinking as a leader.

I have come to know Raphaël as a very authentic person and have always been impressed by his ability to combine analytical thinking with teamspirit and a sincere commitment to the well-being of his coworkers.

It is easy to make an instant connection with Raphaël since he is the kind of person who stays true to himself in different settings. He has a calm and natural way of interacting and his global view of the world resonates in ways he may not always realize himself.

He consistently applies his own learning and reflections to newly developing situations and to the questions I pose. I notice how the theme of ‘critical thinking’ thus also forms part of our conversation at a meta level.

What is critical thinking for Raphaël?

Raphaël sees critical thinking as the necessity to see and observe what is happening around us, challenge the standard way of thinking that we are accustomed to and adapt to changing circumstances. This is particularly important as we experience the intense amount of change over the last year. He stresses how important it is that we continue to think out of the box, the ‘greenfield’ way of thinking which he describes later in the interview.

The observer view, or third position as we call it in coaching, is important for this critical thinking. In response to me asking if he did a lot of that during the last year, Raphaël mentions that he found it difficult to observe in isolation since he is so accustomed to physical interaction with people and ‘checking’ his observations in dialogue.

The challenges of critical thinking

First, we explore how emotions may get in the way of critical thinking. Raphaël makes an interesting observation: the validation of emotions has been more challenging lately, again because of the lack of physical interaction with other people.

Managing emotions is particular to different people. Raphaël tries to capture his emotions and then analyzes and critically reflects on them.

Regarding his leadership position, he emphasizes a need to mitigate his more difficult emotions; to lead by example and only show what brings other people forward. ‘Humans live and learn this until their last day…’ he says. The eternal student; I couldn’t agree more.

Another challenge is how to maintain critical thinking without polarizing?

This is challenging because, here particularly, emotions may get in the way and emotions today are more difficult to manage.  We need to challenge our train of thought multiple times.

Checking the facts’ accuracy becomes particularly important. ‘Sometimes the facts are not there but then you need to chase the facts and continue to communicate’ he says

The ‘flow’ of the cook

Raphaël loves cooking and I ask him about how he links his passion for cooking to critical thinking.

Cooking, and consulting as well, are relaxing, particularly when you are comfortable with the elements, he says. Both are engines in which different information is transformed into an outcome.  His passion for cooking shines through when he discusses how ‘you can’t change a soup to a pizza’.

Raphaël explains a linear process and at the same time I notice that he makes lateral movements. I see ‘flow’ in his explanation. A focus on results combined with an appreciation for difference; critical thinking as multi-dimensional…

Raphaël reflects on the fact that he learned over the years to look at things from different angles. Initially, he had a narrower view on things as a technical consultant. He quickly realized that he had to go beyond by becoming more involved in the functional elements of the business, enabling the platforms they worked with to bring more value to clients.

The ‘greenfield’ of critical thinking

We end the conversation by reflecting on the challenges of having a global family during these times. Following my question on whether he believes that restricted borders have limited our ability to look at things from different perspectives the last months, Raphaël gives a refreshing answer. He says it is complicated because we are experiencing something new. His tone of voice picks up and I sense his energy level rising as he comments on the fact that we have captured a world of knowledge over the last year and a half. ‘We are in a greenfield situation of critical thinking. We need to re-think what critical thinking really means since the circumstances are so new and there is nothing from before to compare to’.

A great positive way to finish the conversation…

Key takeaways and additional input on the topic of critical thinking

Be inspired by the insightful interview with Raphaël and enjoy your continuous critical thinking process.

The Q's of Qlick: Resilience